All younger generations have been going to the dogs ... but this one was genuinely sunk!

“Strayed off again—the young idiot! If he’s playing in the shallows, with this tide going out...” Pater let the sentence hang blackly. He leaned upslope as far as he could stretch, angrily scanning the shoreward reaches where light filtered more brightly down through the murky water, where the sea-surface glinted like bits of broken mirror.

Mater was peering fearfully in the other direction, toward where, as daylight faded, the slope of the coastal shelf was fast losing itself in green profundity. Out there, out of sight at this hour, the reef that loomed sheltering above them fell away in an abrupt cliffhead, and the abyss began.

“Oh, oh,” sobbed Mater. “He’s lost. He’s swum into the abyss and been eaten by a sea monster.” Her slender stem rippled and swayed on its base and her delicate crown of pinkish tentacles trailed disheveled in the pull of the ebbtide.

“Pish, my dear!” said Pater. “There are no sea monsters. At worst,” he consoled her stoutly, “Junior may have been trapped in a tidepool.”

“There ARE no land monsters!” snorted Pater. He straightened his stalk so abruptly that the stone to which he and Mater were conjugally attached creaked under them. “How often must I assure you, my dear, that WE are the highest form of life?” (And, as for his world and geologic epoch, he was quite right.)

Her spouse gave her up. “JUNIOR!” he roared in a voice that loosened the coral along the reef.

“Discipline!” growled Pater. “That’s what he needs! Just wait till I—” 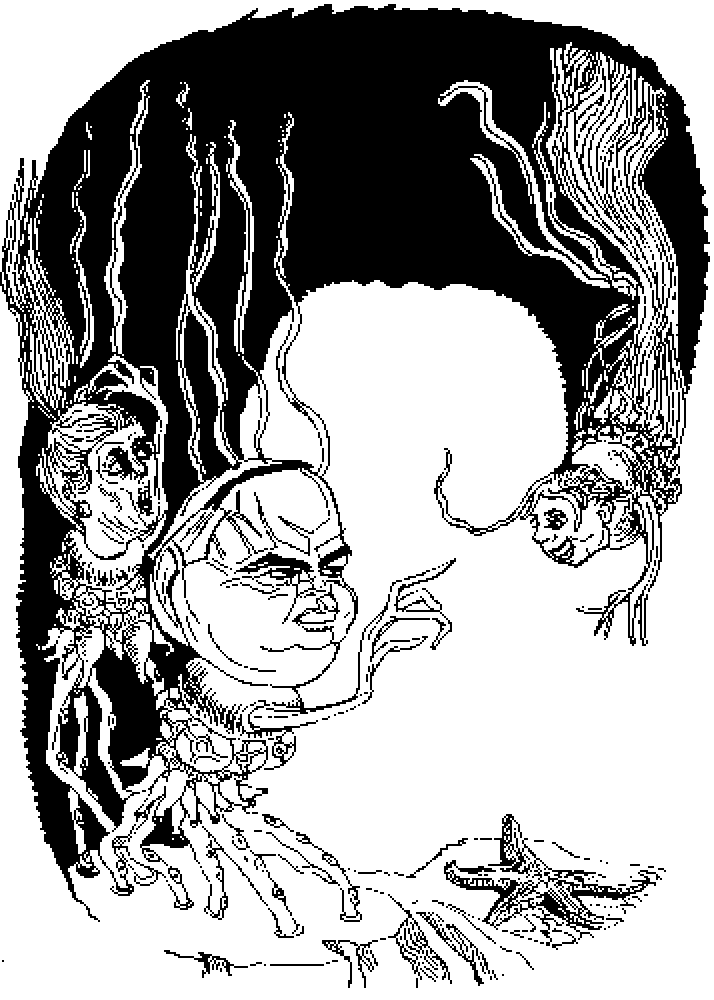 His parents swiveled as if on a single stalk. Their offspring was floating a few fathoms above them, paddling lazily against the ebb; plainly he had just swum from some crevice in the reef nearby. In one pair of dangling tentacles he absently hugged a roundish stone, worn sensuously smooth by pounding surf.

“WHERE HAVE YOU BEEN?”

“With the other polyps,” Mater corrected him primly. She detested slang.

Pater was eyeing Junior with ominous calm. “And where,” he asked, “did you get that stone?”

Junior contracted guiltily. The surfstone slipped from his tentacles and plumped to the sea-floor in a flurry of sand. He edged away, stammering, “Well, I guess maybe ... I might have gone a little ways toward the beach...”

“You guess! When I was a polyp,” said Pater, “the small fry obeyed their elders, and no guess about it!”

“And no spawn of mine,” Pater warmed to his lecture, “is going to flout my words! Junior—COME HERE!”

Junior paddled cautiously around the homesite, just out of tentacle-reach. He said in a small voice, “I won’t.”

The neighbors stared. The three maiden aunts clutched one another with muted shrieks, savoring beforehand the language Pater would now use.

“Now, dear,” put in Mater quickly. “We must be patient. You know all children go through larval stages.”

“When I was a polyp...” Pater began rustily. He coughed out an accidentally inhaled crustacean, and started over: “No spawn of mine...” Trailing off, he only glared, then roared abruptly, “SPRAT!”

“I won’t!” said Junior reflexively and backpaddled into the coral shadows of the reef.

“That wallop,” seethed Pater, “wants a good polyping. I mean...” He glowered suspiciously at Mater and the neighbors.

“What Junior was doing ... carrying a stone. I don’t suppose he understands why, just yet, but...”

Pater was once more occupied with improving Mater’s mind. It was a long job, without foreseeable end—especially since he and his helpmeet were both firmly rooted for life to the same tastefully decorated homesite (garnished by Pater himself with colored pebbles, shells, urchins and bits of coral in the rather rococo style which had prevailed during Pater’s courting days as a free-swimming polyp).

“Intelligence, my dear,” pronounced Pater, “is quite incompatible with motility. Just think—how could ideas congeal in a brain shuttled hither and yon, bombarded with ever-changing sense-impressions? Look at the lower species, which swim about all their lives, incapable of taking root or thought! True Intelligence, my dear—as distinguished from Instinct, of course—pre-supposes the fixed viewpoint!” He paused.

Mater murmured, “Yes, dear,” as she always did obediently at this point.

Junior undulated past, swimming toward the abyss. He moved a bit heavily now; it was growing hard for him to keep his maturely thickening afterbody in a horizontal posture.

“Just look at the young of our own kind,” said Pater. “Scatter-brained larvae, wandering greedily about in search of new stimuli. But, praise be, they mature at last into sensible sessile adults. While yet the unformed intellect rebels against the ending of care-free polyphood, Instinct, the wisdom of Nature, instructs them to prepare for the great change!”

He nodded wisely as Junior came gliding back out of the gloom of deep water. Junior’s tentacles clutched an irregular basalt fragment which he must have picked up down the rubble-strewn slope. As he paddled slowly along the rim of the reef, the adult anthozoans located directly below looked up and hissed irritable warnings.

He was swimming a bit more easily now and, if Pater had not been a firm believer in Instinct, he might have been reminded of the grossly materialistic theory, propounded by some iconoclast, according to which a maturing polyp’s tendency to grapple objects was merely a matter of taking on ballast.

“See!” declared Pater triumphantly. “I don’t suppose he understands why, just yet ... but Instinct urges him infallibly to assemble the materials for his future homesite.”

“Junior,” said his parent solemnly, “now that you are about to grow down, it behooves you to know certain facts.”

Mater blushed a delicate lavender and turned away on her side of the rock.

“Very soon now,” said Pater, “you will begin feeling an irresistible urge ... to sink to the bottom, to take root there in some sheltered location which will be your lifetime site. Perhaps you even have an understanding already with some ... ah ... charming young polyp of the opposite gender, whom you would invite to share your homesite. Or, if not, you should take all the more pains to make that site as attractive as possible, in order that such a one may decide to grace it with—”